Military and Law Enforcement Appreciation Day honors the individuals who make our communities and world a safer place. As a thank you for your service, all law enforcement, military, and first responders receive a FREE One-Day Pass to GSX on Wednesday, 29 September.

Use code PROTECT at registration for your FREE One-Day Pass. 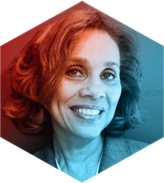 Nadja West
A trailblazer in leadership, Lieutenant General (ret) Nadja West is the 44th Army Surgeon General and the former Commanding General of US Army Medical Command. She is the first African American woman 3-star General in the Army’s history, and currently the highest-ranking woman to ever graduate from West Point.

West shares her story of grit, perseverance, strength, and breaking boundaries, even when faced with adversity. Taking audiences on her journey to becoming the Army’s first African American woman 3-star General, she motivates them to overcome challenges with self-belief, bravery, and balance. With more than 20 years of experience in executive leadership, crisis management, and disaster response — including her instrumental role in crafting the DOD medical response to the Ebola crisis – West speaks expertly on leadership tactics to effectively lead teams through times of uncertainty and crisis.

As Commanding General of MEDCOM, West managed an $11 billion budget and led an organization of more than 130,000 healthcare professionals. She supported more than 4 million people around the globe – responsible for medical centers, community hospitals, and clinics; dental, veterinary, and public health facilities; research, education and training platforms. Known for her decisive leadership, West led the Army Medical Department through the most comprehensive transformation that military medicine has seen in more than three decades, and throughout this transition, ensured that the medical readiness of the force remained high, medical support was timely, and that the quality of healthcare provided to move than 4 million lives remained outstanding. A graduate of George Washington School of Medicine, she completed residencies in Family Medicine and Dermatology, and has held various clinical, operational, and leadership positions throughout her 30+ year career as a soldier.

West gratefully acknowledges the trailblazers who helped clear the path for her to follow and is continuing to blaze the path for others to follow. Among many Army firsts, she was the first woman selected to be the Division Surgeon for 1st Armored Division and the first woman selected as the Joint Staff Surgeon – advising the Chairman of the Joint Chiefs of Staff on all things medical. West was also the first African American – man or woman – confirmed by the Senate to be the Army’s Surgeon General.

In addition to West’s many military accolades, she was named as one of Washington’s Most Powerful Women in Washingtonian Magazine, the recipient of the Daughters of the American Revolution Margaret Cochran Corbin Award, and awarded the Armed Forces Medical Advocate Award by Essence Magazine. West has also been honored by George Washington University with the Distinguished Alumni Achievement Award and holds an honorary degree of Doctor of Public Service from the George Washington University and an honorary Doctorate of Humane Letters from Methodist University.

West was a Hauser Leader at the Harvard Kennedy School Center for Public Leadership for the 2019-2020 academic year, and serves on the boards of directors for Americares, Johnson & Johnson, Nucor Corporation, and Tenet Healthcare Corporation. She is also a trustee of Mount St. Mary’s University, the Bob Woodruff Foundation dedicated to supporting our veterans, service members, and their families, and the National Recreation Foundation dedicated to enhancing the role of recreation as a positive force in improving the quality of life of youth.