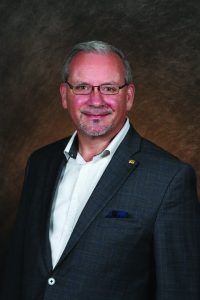 Today, Shayne Bates, CPP is a seasoned security consultant, involved ASIS International volunteer leader, and perpetual traveler throughout the United States, but 25 years ago he was just beginning to find success in the information security field in New Zealand. He joined ASIS in the mid 1990s and was involved with the ASIS New Zealand chapter.

During the chapter study sessions for his certification preparation, Bates began to understand the role information security played in the larger security industry.

As Bates learned more about the broader security industry and his role in it, he realized it was time to invest in himself and his goal of becoming a career security practitioner. Despite the substantial commitment involved in attending ASIS’s flagship event—which included leaving his growing business for two weeks and flying across the globe to Orlando—Bates and a half dozen other New Zealanders took the leap, and he hasn’t looked back since.

Bates describes carefully planning his approach to the ASIS Seminar and Exhibits—now known as GSX—including attending as many educational sessions as possible. Between sessions, Bates would walk through the exhibit hall, learning about the latest security technology offerings.

“It’s hard work to try to get around there and see everything that’s relevant in three days—there’s so much value to be discovered just by walking up and down the aisles and collecting information and taking notes,” Bates explains. “I was able to see new product innovations and talk to product manufacturers firsthand. I’d make that contact, swap business cards, and have a more detailed conversation with them when I got back home to New Zealand.”

After attending that first event in Orlando, Bates understood the importance of investing in himself and his career and has attended every seminar and GSX event since.